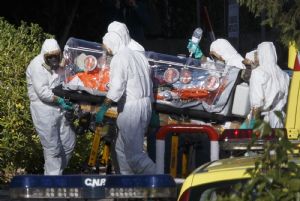 This week Charlie discusses how the Ebola crisis is creeping up on all of us.

The situation in West Africa, with the on-going spread of Ebola, bears all the classic symptoms of a ‘creeping’ or ‘rising tide’ crisis.

In Tally’s Handbook of Disaster and Emergency Management Principles and Practice (edited by Lakha & Moore, 2004) a rising tide crisis is described as a: “Problem which creeps up gradually, such as occurs in the case of organised crime, corruption, a developing infectious disease epidemic or a steady stream of refugees into a country. There is no clear starting point for the crisis and the point at which it becomes a crisis may only be clear in retrospect.”

At present the disease is out of control in Sierra Leone, Liberia and Guinea. The latest news from the BBC says that in Sierra Leone there are five new cases of Ebola every hour and that a total of 765 new cases were reported in the West African state in the last week alone.

The problem is compounded by the fact that there are only 327 hospital beds in the country. The disease has killed 3,338 people so far. The situation is made even worse by the fact that 10% of Ebola deaths have been health professionals. Those trying to prevent the spread of the disease are being killed by it.

When the present outbreak was first known about there was little interest in Europe and the Americas. Although the disease has a high mortality rate, and there is little known about it, previous outbreaks have always been kept under control quite quickly.

This outbreak has been the worst to date and Western countries only started paying attention when the crisis started to affect them. Britain had William Pooley, the nurse who contracted Ebola in Sierra Leone but has since made a full recovery. While for the USA there were two missionaries who were brought back home for treatment and a man who returned from Liberia with the disease and is presently in a Texan hospital. The outbreak now features regularly in the news.

The USA has deployed troops to Liberia to set up field hospitals and healthcare facilities. Earlier this month, Britain said it would build facilities for 700 new beds in Sierra Leone but the first of these will not be ready for weeks, and the rest may take months. According to experts, one and a half million people could be infected by January if the disease is not halted.

I think for us, as business continuity people, a creeping crisis is one of the most dangerous types of events. It slowly builds and you suddenly find yourself in the middle of a major incident when you should have recognised it earlier. Not recognising the crisis early on may compound the effect on the organisation and lead to increased negative coverage. This is especially true when the crisis involves death or injury to customers or members of the public.

So what should you do to prevent this happening?

1.    Understand your organisation’s possible vulnerabilities and make sure that any incident involving them is analysed to see if it might turn into a major incident or crisis.

2.    Have mechanisms in place that look for common incidents across the organisation, especially if you are a large organisation operating at multiple sites or across many different countries. By encouraging all parts of the organisation to report issues and by analysing them centrally, you can identify patterns before your customers or the media do.

3.    Think ‘worst case scenario’ and ‘what if something else happened at the same time?’ If we understand these then we can monitor the event and if they seem to be heading in the wrong direction then we can prompt the organisation to take early action and prevent the incident becoming a crisis.

With this monitoring and horizon scanning in place hopefully we can identify incidents before they become a crisis and have a major impact on our organisation.