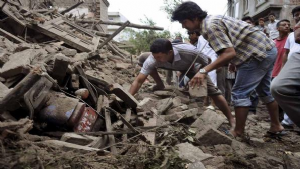 Yesterday there was some good news from the Nepal earthquake in that two people were pulled out alive from the rubble five days after the earthquake struck Kathmandu and the surrounding area.

The devastation seems immense and at the moment the death toll stands at 5,500. On the news last night, the rescue was shown and it was heartening to see three different country’s search and rescue teams working together to save a lady trapped deep underground.

As business continuity people have you ever thought about why incidents occur? Are they completely random ‘acts of God’ or is something more complex occurring which we could predict, anticipate and actually prevent happening. It is difficult to prevent an earthquake and know when it is going to take place. Most people who live in earthquake zones know one could occur and can take precautions to make their homes and livelihoods more resilient by ensuring that their buildings are earthquake proof and by preparing to respond, if an event occurred. Nepal is a well-known earthquake zone and Kathmandu was devastated by an earthquake in 1934 where the death toll was between 10,700 – 12,000 people.

I thought this week I would share some work by Barry Turner who wrote a very important paper in 1976 challenging the then current thoughts that incidents occurred randomly as ‘acts of god’. The main thrust of his work was that organisations can incubate a disaster and that incidents are neither random or not preventable.
He outlines six stages from the way we organise our organisations to prepare for a disaster, to ‘full cultural adjustment’. This happens when we adjust our systems and responses to deal with an incident that has just taken place.

Stage one talks about organisations setting themselves up to prepare for an incident. The organisation decides upon the types of incidents it will prepare itself for; the paper talks about ‘initially accepted cultural beliefs about the world and its hazards’. At this stage the organisation puts in place controls to prevent events happening and follows and implements appropriate legislation or guidance.

Stage two in the paper is where the incident ‘incubates’. This could take place over months, but more likely years, if not decades. What is important in this paper is that the incident slowly incubates and in hindsight we can see the string of events which lead to the incident occurring but fail to recognise them in real time when they are taking place.

Turner points out seven events looking at three case studies, Aberfan (Landslide in 1966 killing 144), Hixon (Rail crash in 1968 at level crossing killing 11) and Summerland (Fire in 1974 which killed 50), which seem common across all three incidents and prevented those responsible recognising that there was a potential incident and doing something about it.

The seven events are:
1.     Rigidities in perception and belief in organisational settings – the potential incident is not recognised within the organisation as it is believed ‘it could not happen here” or is not relevant to our organisation.
2.     The decoy problem – another incident is seen as more likely and so efforts at control or prevention are concentrated on this instead. This can also occur as the organisation looks at well-defined problems which are perhaps easier to deal with than the more vague and ill-defined problems.
3.     Organisational exclusivity and disregard of non-members – the organisation does not listen to individuals or organisations outside their own organisation that may be warning them about a potential problem.
4.     Involvement of strangers – the involvement of the public or another organisation who shouldn’t be involved in the incident can make the problem more complex when it occurs.
5.     Failure to comply with existing regulations – the controls put in place in accordance with existing regulations degrades over time, or regulations have moved on. The regulations may have been updated but the organisation hasn’t adopted or implemented them.
6.     Minimising emerging dangers – the oncoming incident is recognised but underestimated either in terms of the likelihood of it occurring, or its impact.
7.     Information difficulties – there is information which points to the incident that is going to occur, but it is ignored. The significance is not recognised, not shared between organisations, obscured by irrelevant information or not shared or recognised by personal issues between organisations or individuals.

If we go back to the Nepal earthquake the precipitant event is actually the earthquake, but I would suspect that once we get out of the search and rescue phase and into the review of the event we may find a number of stage two events. These could be, and I am only speculating here, failure to follow building codes, lack of preparation and perhaps a general belief that ‘it won’t happen here’ and we will ignore the possibility. Although they couldn’t stop the earthquake they could have perhaps been better prepared to limit the damage and respond when it occurred. One thing Turner didn’t say in his paper, which is relevant in this case, is that Nepal is a very poor country so even if they did recognise the danger, their ability to resource the necessary preparation may have been limited.
Stage four of the paper talks about recognising the incident, stage five about the rescue and salvage and stage six is about ‘full cultural adjustment’ where the incident has changed or top management recognise the need for change within the organisation.

I think the thoughts of Barry Turner are important for us as business continuity people; if we recognise that our organisation can be incubating a disaster then we have the opportunity to do something about it and change our systems rather than waiting for an ‘act of god’ to occur. The difficulty for us is that we recognise the potential issues but does the organisation, as a whole, recognise the issue or listen when we point it out?

So a challenge for you – what mechanisms have you put in place to check that your organisation is not incubating a disaster?